Mendelssohn: Cello sonata no 1 in B flat Op 45 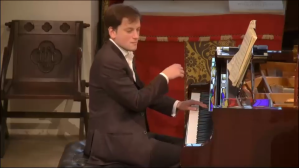 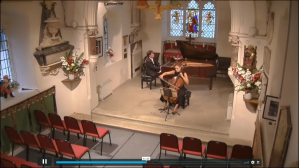 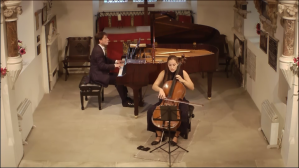 Cellist Yoanna Prodanova was born in Varna, Bulgaria. She completed her studies in 2019 at the Royal Academy of Music in London where she was a Bicentenary Scholar on the prestigious Advanced Diploma course, already having obtained her Bachelor and Master’s degrees at the Guildhall School of Music and Drama. Previously she studied in Varna and in Montreal where her family immigrated in 2006.Yoanna has performed concertos with the RAM Orchestra and the Doric String Quartet, the Amati Orchestra, the Surrey Philharmonic and the Guildford Symphony Orchestra among others. She regularly performs as a recitalist in the UK and Europe. Yoanna’s awards include The Philip and Dorothy Green Award for Young Artists (2016), the Sylva Gelber Award (2017, 2018), Tunnell Trust Award (2019) and the First prize at the International Joachim Competition in Weimar with her string quartet, the Barbican Quartet. Yoanna’s most important cello mentors have been, in chronological order, Daniela Kirilova, Denis Brott, Louise Hopkins, Rebecca Gilliver, Richard Lester and Hannah Roberts. She is extremely grateful to the Canimex Group for the loan of a beautiful cello made by Giuseppe Gagliano.

Born in Bucharest, Mihai Ritivoiu won the Dinu Lipatti National Competition in 2010 and was laureate of numerous international competitions including the George Enescu Competition in 2011 (Bucharest), Tunbridge Wells International Young Concert Artist Competition in 2014 and Teresa Llacuna Competition in 2015 (Valence). Most recently, he was awarded the Gold Medal at the Beethoven Piano Society of Europe Intercollegiate Competition. He leads an international career performing solo and chamber music recitals in Europe and Asia. He also played concertos with the Bucharest Philharmonic Orchestra, the Lausanne Chamber Orchestra, the English Chamber Orchestra and the MDR Leipzig Radio Orchestra. Regularly invited to play on BBC Radio 3’s programme ‘In Tune’, his performances have been broadcast on Radio Romania Muzical, Radio Television Suisse and Medici TV He studied at the National University of Music in Bucharest and at the Guildhall School of Music & Drama in London with Joan Havill. Mihai is a City Music Foundation artist and a Yeoman of the Worshipful Company of Musicians. He has received generous support from the Liliana and Peter Ilica Foundation for the Endowment of the Arts, Erbiceanu Cultural Foundation and Ratiu Family Charitable Foundation.

For the second concert of Dr Mather’s Autumn season it was refreshing to hear late Beethoven in the hands of such a distinguished young duo.I have heard Mihai many times as a solo pianist but this is the first time that I could really appreciate his superb musicianship as he partnered Yoanna Prodanova in a programme that included one of Beethoven’s last piano and  cello sonatas and also the rarely heard Sonata in B flat by Mendelssohn. 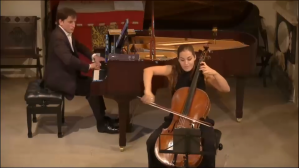 The two sonatas op 102 by Beethoven were composed between May and December 1815. During the period 1812 to 1817 Beethoven, ailing and overcome by all sorts of difficulties, experienced a period of literal and figurative silence as his deafness became overwhelmingly profound and his productivity diminished. Following seven years after the A Major Sonata op 69, the complexity of their composition and their visionary character marks (together with the  piano sonata op 101) the start of Beethoven’s”third period”.The critics of the time, often perplexed by Beethoven’s last compositions, described the sonatas in the Allgemeine musikalische Zeitung  :’They elicit the most unexpected and unusual reactions, not only by their form but by the use of the piano as well…We have never been able to warm up to the two sonatas; but these compositions are perhaps a necessary link in the chain of Beethoven’s works in order to lead us there where the steady hand of the maestro wanted to lead us.’

The beautiful opening Andante with a magical  transition to the  Vivace risoluto was played with great rhythmic energy and lyricism .A meltingly beautiful Adagio with the poignant ‘teneramente’ that led to the impish Allegro Vivace with its typical Beethoven sting in a tail theme that appears in so many different guises throughout this movement.A superb dialogue between piano and cello each listening so attentively to the other in a fascinating intelligent musical conversation between real musicians. 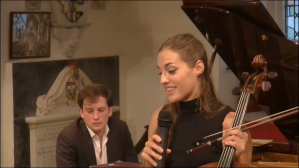 As Yoanna pointed out in her introduction it is the high register of the cello that Beethoven surprisingly exploits in this late work.She also said how beautifully Schumann’s Romances for Oboe and piano fitted  the cello register which explains why it is more often heard on the cello than in its original form!The rarely heard Mendelssohn Sonata was in many ways almost like a piano concerto with its virtuosistic writing for the piano with cascades of notes glistening with a freshness and lyricism that is so much part of Mendelssohns’ age.

The Three Romances originally  for Oboe and Piano, op. 94  is Schumann’s  only composition for oboe although more often played these days on the cello.It was composed in December 1849 one of the most productive years of Schumann’s entire career. Previously that year, Schumann had written two other works for wind instruments and piano: the Adagio and Allegro, op. 70, for French Horn and piano, and the Fantasy Pieces for Clarinet and Piano op 73. Unlike many other oboe works at the time, the pieces were not the result of a commision by a prominent soloist of the day  and Schumann gave the pieces to his wife ,Clara, whom he once described as his own “right hand”,] as a Christmas present, calling them his “hundredth opusculum.” His mental health was quickly deteriorating during the time of the composition; shortly afterwards, he moved from Dresden to  Dusseldorf, where he was admitted to and eventually died in an asylum.His publisher Nikolaus Simrock had written to Schumann on November 19, 1850, asking whether or not he “would be in agreement if we were to print on the title page: ‘for oboe and pianoforte’ and on the second  ‘for violin and pianoforte’ and on the third ‘for clarinet and pianoforte’, since it is not looked upon with favour when several instruments appear on the title page.” However, Schumann denied the request, replying, “If I had originally written the work for violin or clarinet it would have become a completely different piece. I regret not being able to comply with your wishes, but I can do no other.”

The first Romance was beautifully shaped in a great arch followed by the  passionate lyricism of the second and the great character they brought to the story that is told in the third.Some sumptuous sounds of great beauty. 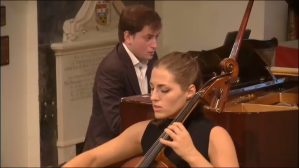 The Sonata in B flat major, Opus 45, by Mendelssohn was written around the beginning of 1838. In a letter of January 20th Mendelssohn mentions that it is finished, and also that he had been suffering from an ear infection which had left him temporarily deaf in one ear and fearful of the consequences. It was, nevertheless, a happy time: his wife Cecile was about to give birth to their first child, Karl Wolfgang Paul, who was born on February 7th. The child’s third name was in honour of Mendelssohn’s brother Paul, a financier and amateur cellist for whom this sonata, and the earlier Variations concertantes, were written.The Mendelssohns were at this time living in Leipzig, where Felix was the conductor of the orchestral concerts in the Gewandhaus. His innovations in this series had a far-reaching effect on German musical life in general. He took over the conducting of symphonies, which had previously been directed ‘from the violin’ by the orchestral leader. He hired better players, and fought successfully to get their salaries raised. Equally important were his imaginative programmes. In the 1837/38 season, when this Sonata was written, he devised four ‘historical concerts’ which introduced the public to the music of Handel, Bach, Viotti, Cimarosa, Haydn, Naumann, Righini, Mozart, Salieri, Beethoven and the Abbé Vogler. Perhaps the large amount of music from the Classical era influenced the character of his own compositions, for the B flat Sonata is certainly Classical in form and mentality. Its textures are light and clear, its pacing superbly graded; only the piano writing, with the excited heartbeats common to both sonatas, shows the restless temperament of the nineteenth century.

A rarely heard sonata with beautiful interplay between the cello and the piano.Full of typical freshness and charm with great excitement to the coda of the first movement before the simplicity of the second.A true ‘song without words’ of great delicacy dissolving so magically into nothing.The passionate forward motion  of the last movement was played with a refreshing lilt before the ever more virtuosistic exchanges superbly played by this fine duo .The ending was pure  unexpected magic.