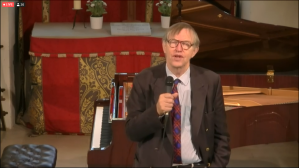 Rachmaninov: Piano sonata no 2 in B flat minor Op 36

Chinese – British concert pianist Bocheng Wang was born in Lanzhou, China, and is currently studying with Professor Christopher Elton for Bachelor’s Degree at the Royal Academy of Music, generously supported by the Violet Irene Strutton Award with a full scholarship. He is an artist at the Talent Unlimited Foundation. Bocheng started to play the piano when he was five and his competition successes includes the first prize at Grand Prize Virtuoso “Salzburg” International Music Competition (2019), first prize at Croydon Concerto Competition (2015), second prize at Liszt International Society Piano Competition (2015), and third prize at the ‘Young Pianist of the North’ International Piano Competition (2012). In 2018, he was a semifinalist at the prestigious Santander International Piano Competition and performed with the Cuarteto Quiroga. In recent years, he has performed with many orchestras such as Dulwich Symphony, London Mozart Players and Purcell Symphony. He has appeared in many international festivals such as Konzertarbeitswochen Goslar, PianoTexas, Ferrara, Oxford and Dartington. In June 2016, he was invited to play for a celebratory concert in honour of HM The Queen Elizabeth II ‘s 90th birthday and honoured to meet Prince Edward, Earl of Wessex. Since then, he performed in prestigious venues such as the FAZIOLI Hall in Sacile, Italy, Royal Conservatoire of Scotland, London’s Kings Place, Wigmore Hall, St. Martin-in-the-fields, Fairfield Hall and Watford Colosseum. 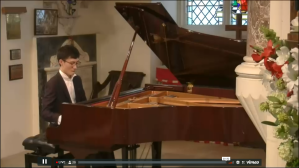 I have deliberately placed a photo of Dr Mather at the head of this  piece about the recital by Bocheng Wang in order that we might wish this extraordinarily generous and enthusiastic retired physician  all best wishes for his 75th birthday that he celebrated yesterday the 6th July.Promoting with the help of his dedicated colleagues so many young musicians who otherwise would be denied a platform for their quite extraordinary talent.In a beautiful redundant church in the center of Ealing Golf Course  the concerts are streamed wordwide.In an empty church as these times prescribe they are live performances that are enjoyed by a very large audience in their own homes.On Sunday there will even be a live stream in collaboration with the Arts Club in Washington and  the Keyboard Charitable Trust.

So it was fitting that this slightly built young chinese pianist should have given such a magnificent performance of the Rachmaninov Second Sonata that truly honoured this special birthday week.It is interesting to note that three years after his third piano concerto was finished, Rachmaninoff moved with his family to a house in Rome that  Tchaikovsky had used and it was during this time in Rome that Rachmaninoff started working on his second piano sonata. However, because both of his daughters contracted typhoid fever, he was unable to finish the composition in Rome and it was completed at his country estate in Russia. The first performance was in 1913 but Rachmaninov thought it too long and  later revised it in 1931 reducing it by 6 minutes  from 25 to 19.Horowitz made his own revision in 1940 with the composers consent incorporating some of the original version and it last 22 minutes.

I assume that Bocheng played the Rachmaninov 1931 edition  as it lasted almost the 19 minutes that Rachmaninov prescribed in 1931!He immediately plunged in the tumultuous world of Rachmaninov.Playing with great virtuosity and truly sumptuous sonorities.There was a  luminosity to the sound and his great sense of balance always allowed the melodic line to sing with such ease.From the deeply felt slow movement played as a deep lament with some beautiful colouring to the wonderful melodic climax of the final played with such passionate involvement and so reminiscent of the great climax of the third concerto.There was never a hard sound in this young man’s hands but always a rich Philadelphian sound of such velvety beauty and passion. The sheer animal excitement of the ending was breathtaking and indeed reminded me of the first first time I had heard this sonata in a live performance by Horowitz.The frenzy and sweep brought the audience to their feet at the end as I am sure they would have been today.I like to think that the hidden audience were cheering over a cup of tea in their own homes.

The concert had begun with the beautiful C minor Sonata of Haydn.It was played with a delicacy and precision but  at the same time shaped with some very aristocratic rubato.The refreshingly innocent lyricism of the opening was beautifully controlled and contrasted so well with the crisp crystal  clarity of the contrasting  faster  passages.His superb sense of balance allowed the melodic line in the Andante con moto to sing with an almost operatic freedom and the Allegro molto that follows was played with great character and rhythmic energy.

The Andante Spianato and Grand Polonaise by Chopin began truly ‘spianato’ or smoothly. There was a lovingly shaped melodic line over a  murmuring left hand with the embellishments glittering in his very sentitive hands.There was also a gentle nonchalance to the contrasting mazuka section that was very beguiling.The Grand Polonaise was played with great style although his orchestral players could have been a little more disciplined and he could have taken much more time to display his virtuosity and delicacy to the full. He played with great rhythmic urgency and sense of style but feel if he had played it just a little slower he could have allowed us to wallow in the beautiful sounds that he was making as he had done so magnificently in the Rachmaninov Sonata that followed. 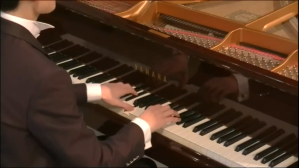 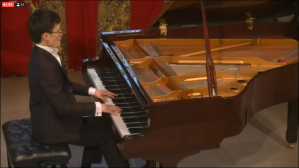